The Spying Game: An Australian Angle

What are the roles of reason and imagination in secret intelligence? How do apparently normal people get involved? What happens to them? While British, American and Soviet empires have produced plentiful supplies of heroes, villains and stirring tales, Australians have typically averted their gaze from this country’s involvement in the ‘second oldest profession’. And yet espionage has been a part of Australia’s history since the earliest European imaginings of a southern land mass. Australian spies have produced their share of heroes and villains and this book shows how they influenced Australia’s diplomatic and military policy, and the personal price some of them paid.

‘As this book shows, films, novels and memoirs enable authors to imagine the deep-seated predilections and peccadilloes of spies and secret agents over the last four centuries of Australian existence. Sex and seduction? Those books and this one are replete with it. Narcissism? It is everywhere in novelistic and filmic treatments of the theme. Surprises? There is perhaps no more apposite concept in the context of The Spying Game than that of the unexpected.’ — Foreword

Bruce Bennett’s contribution to Australian literary studies was outstanding. His books include An Australian Compass 1991, Spirit in Exile 1991, The Oxford Literary History of Australia 1998, with Jennifer Strauss, Australian Short Fiction 2002, Homing In 2006 and he is co-editor of the anthology Of Sadhus and Spinners: Australian Encounters with India 2009.

Be the first to review “The Spying Game: An Australian Angle” Cancel reply 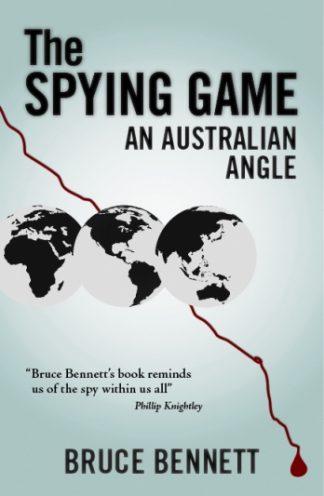 You're viewing: The Spying Game: An Australian Angle $39.95
Add to cart