View cart “Cheon of the Never Never” has been added to your cart.

The Commonwealth of Speech: An Argument about Australia’s Past, Present and Future

The information revolution, the triumph of globalism, the onrush of a knowledge economy, the end of history. At the beginning of a new century and a new millennium so much is changing, and changing from the bottom up. But all these changes depend on a human phenomenon that must stay more or less the same. We still talk to each other in much the same way as we always did. Talk is the hidden foundation of human history.

This book explores the way common conversation matters for the past, present and future in Australia. Alan Atkinson argues that during the last two hundred years we have been beguiled by reading and writing. Only during the last part of the twentieth century have we begun to remember the importance of speech as a source for truth in human affairs. During the 1990s small numbers of scholars around the world began to ask themselves how noise of all kinds, including talk, ought to be understood. This book begins the task from an Australian point of view.

Alan Atkinson is Professor of History at the University of New England, in northern New South Wales. The first volume of his major work, The Europeans in Australia: A History, appeared in 1997 and has won two national awards for non-fiction and the University of London’s Trevor Reese Memorial prize.

Be the first to review “The Commonwealth of Speech: An Argument about Australia’s Past, Present and Future” Cancel reply 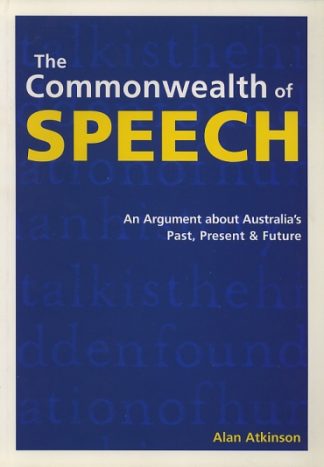 You're viewing: The Commonwealth of Speech: An Argument about Australia’s Past, Present and Future $34.95
Add to cart