St Paul's Cathedral, originally designed to make a statement on the place of religion in the Colony of Victoria, now stands, with the creation of Federation Square, at the very centre of Melbourne.

In commencing St Paul’s Cathedral in 1879, Bishop James Moorhouse sought to make a statement regarding the place of religion and, particularly, the Church of England in the Colony of Victoria and its capital, Melbourne. By locating it at the city’s transport node, he placed it strategically in relation to future developments.

The appointment of William Butterfield, 'the best known English ecclesiastical architect', to design the Cathedral resulted in one of Marvellous Melbourne’s signature monuments. The Cathedral opened in 1891. However, the Bank Crash of 1893 and the depression that followed delayed for some decades the full realisation of Moorhouse’s vision for his Cathedral.

In recent years, its denominational identity has become secondary to its perceived appropriateness as the setting for both formal and informal community celebrations. Following the creation of Federation Square, St Paul’s now stands not only at the gate of the city but at the centre.

James Grant graduated from the Melbourne School of History in 1953. In 1957 he co-authored The Melbourne Scene with Geoffrey Serle. He was ordained in 1959 amd was an Assistant Bishop in the Anglican Diocese of Melbourne 1970–99 and Dean of St Paul’s Cathedral 1985–99. He is the Author of Perspective of a Century: Trinity College 1872–1972 as well as Episcopally Led Synodically Governed. Grant is currently a fellow of Trinity College.

Be the first to review “St Paul's Cathedral” Cancel reply 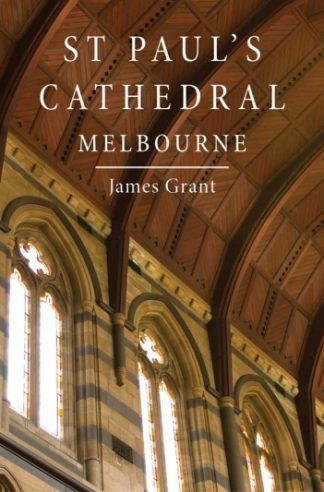