Miss D and Miss N – An Extraordinary Partnership. The Diary of Anne Drysdale

In 1839 Miss Anne Drysdale sailed from Scotland to Port Philip. She was 47 years old, had a small inheritance, and was determined to be a sheep farmer. Soon after arriving in Melbourne she took up land near Geelong and formed a partnership with another enterprising woman, Caroline Newcomb. They established a successful pastoral business and for thirteen years lived and worked together on their properties Boronggoop, on the River Barwon, and Coriyule, on the Bellarine Peninsula. The daily lives of these remarkable women were recorded in Anne's diary and four of its five volumes have survived, providing a rare, detailed account of domestic and farming life in the 1840s. Substantial extracts from the diary are published for the first time in this book, and were selected and edited by Bev Roberts to trace the story of two extraordinary Victorian pioneers.
Co-published with the State Library of Victoria

Be the first to review “Miss D and Miss N – An Extraordinary Partnership. The Diary of Anne Drysdale” Cancel reply 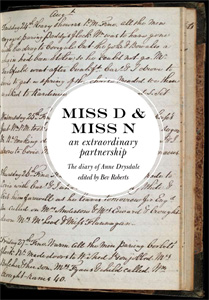 You're viewing: Miss D and Miss N – An Extraordinary Partnership. The Diary of Anne Drysdale $39.95
Add to cart