Water for Gold! The fight to quench Victoria’s goldfields

When Margaret Kennedy discovered gold in an isolated central Victorian creek in 1851 she unwittingly gave birth to nineteenth-century Australia’s richest goldfield: Bendigo. But the diggers who rushed to this new Eldorado found that to wash gold from the alluvium they needed a reliable supply of water. This ‘liquid gold’ powered the steam-technology used to exploit the field’s underground quartz reefs.

Central Victoria’s early mining communities also needed clean water to drink. That need was painfully demonstrated in 1866 when a fierce drought wrought sickness and death from waterborne diseases. Mining also came to a standstill, forcing desperate miners to plead for the Victorian Government to save their dying towns.

Water for Gold! documents the fascinating 27-year-long battle to slake Central Victoria’s thirst by building the Coliban System of Waterworks, an engineering marvel that still supplies Bendigo and Castlemaine to this day.

Be the first to review “Water for Gold! The fight to quench Victoria’s goldfields” Cancel reply 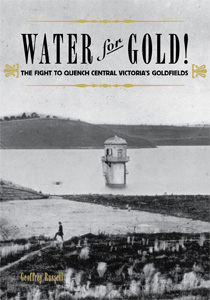 You're viewing: Water for Gold! The fight to quench Victoria’s goldfields $44.00
Add to cart