Colonial Dickens: What Australians Made of the World's Favourite Author

Colonial Dickens moves away from more traditional considerations of Dickens’s view of Australia, and its place in his novels, to explore the multiple ways in which Dickens was read and circulated in the Australian colonies. From the treasured volumes which spoke of a distant home in a shepherd’s bush hut, to hushed and expectant family readings in a well-to-do settler mansion in Van Diemen’s Land, and handsome editions read and loved to extinction in the Public Library in Melbourne, this book claims and explains Dickens’s place in the burgeoning settlements, literary cultures and markets of the New World.

'The authors have turned their archival labours into a work that will appeal both to professional literary people and other more casual readers. It's a smack for the Gradgrinds: fiction is not an escape, but a building block of the world.' — Owen Richardson, The Age

Be the first to review “Colonial Dickens: What Australians Made of the World's Favourite Author” Cancel reply 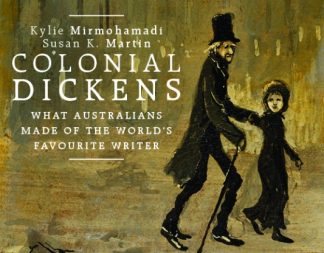 You're viewing: Colonial Dickens: What Australians Made of the World's Favourite Author $39.95
Add to cart