View cart “Living Like a Kelly” has been added to your cart.

From the author of the bestselling memoir Losing Alexandria, City of Longing is a moving love story, steeped in longing, conflict and desire. ‘The betrayal of one’s friends is a bagatelle in the stakes of love, but the betrayal of oneself is lifelong regret’, Tom Stoppard wrote, and it is regret that compels a man to search for the woman who will help him. He is mysterious and immensely wealthy, a banker. She is his apparent opposite, creative and idealistic. They are separated by oceans and continents and much more but, despite their seeming differences, they fall in love. They arrange to meet in New York. Afterwards they will fly to London and from there to Paris, his suite at The Ritz, and to his château in the South of France. But there are many surprises ahead, especially for the woman, whose journey leads her to Morocco and  the Swiss Alps. An unconventional love story with a contemporary backdrop of the worlds of art, myth and literature, conspicuous wealth, globalisation, the politics of medicine and the ecstasy and agony of falling in love.

‘City of Longing is a deeply romantic love story, but  it's also much more – a meditation on literature, history, animal rights, human kindness, the politics of modern medicine, the world of art, bankers and globalisation – and the ramifications of the personal choices we make.’ – Tracey Mair

‘City of Longing is an exquisitely woven tale of love and loss, and if Thompson is playing her cards close to her chest, one can only hope that she is also keeping her beloved Cavafy’s words close to her heart: “Above all, don’t fool yourself, don’t say/ it was a dream”’ – J. S. Breukelaar

Victoria Thompson was born in Alexandria, Egypt, of French, Italian, Spanish and English parentage. She grew up speaking five languages and was educated at The Sacred Heart British Girl’s Convent.

Her parents left Egypt after King Farouk was exiled. Victoria trained as an actress and worked in film, television and theatre. She left acting to study psychology and became a psychotherapist. She eventually gave it up to return to her love of books and writing. Her memoir, Losing Alexandria Picador, was a literary success, appearing for several weeks on the Melbourne Age best-seller list. She has also worked as an interpreter in the medical profession and has travelled to Japan, China, Russia, India and the Himalayas, England, Europe and America.

City of Longing was formally launched at the 2011 Melbourne Writers Festival.

Be the first to review “City of Longing” Cancel reply 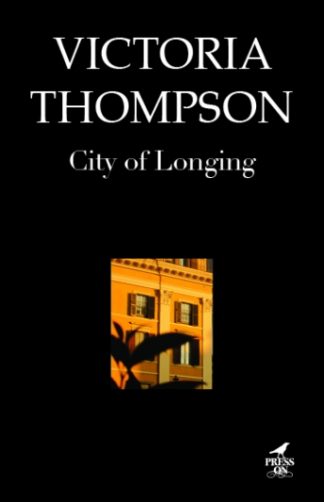