View cart “Hector” has been added to your cart.

Who will believe my verse? The Code in Shakespeare’s Sonnets

What little we know of the life of William Shakespeare is at odds with what would be expected of the greatest humanitarian writer of the Renaissance. Is Shakespeare a pseudonym?

What little we know of the life of William Shakespeare is at odds with what would be expected of the greatest humanitarian writer of the Renaissance. Is Shakespeare a pseudonym? The answer lies in Shakespeare’s Sonnets and its baffling Dedication which is shown to be a code based on the ancient Polybius Square. The Dedication encodes the name of the scholar, politician and ambassador Sir Henry Neville who also encoded his diplomatic dispatches using the Polybian system. Astoundingly, this decryption is validated by an extensive pattern of cross-referencing to the sonnets themselves. Each encrypted word within the Dedication has an exact and predictable mapping to a numbered sonnet. This book not only overturns our understanding of the Sonnets – it demonstrates with mathematical precision that Sir Henry Neville is the true author of the works attributed to William Shakespeare. This is the proof.

“This work reveals an astounding mapping between the strange Dedication to Shakespeare’s Sonnets (1609) and the Sonnets themselves. This predictable pattern not only spells out Sir Henry Neville, it illuminates key events in Neville’s biography. This is a poet’s code – worthy of the greatest English writer. If any doubt remains, Leyland and Goding show that this mapping corresponds to the codes used by Neville as Ambassador to France in 1599. Neville’s story not only fits, it’s verifiable.” – Dr Edward Black, Formerly Head of English, London School of Economics.

“This book is an astonishing achievement, breathtaking in the brilliance of the discoveries and almost overwhelming. The authors have discovered the most intricate mechanism in literature: the Dedication to Shakespeare’s Sonnets is like an advanced pocket watch. If they were only suggesting coded messages as others have in the past, we might doubt their discoveries but they show there is an intricate mechanism, logical and even mathematical in design. This cannot simply be a result of chance.” – Dr John Casson, Author of five books on the Shakespeare Authorship Question.

Be the first to review “Who will believe my verse? The Code in Shakespeare’s Sonnets” Cancel reply 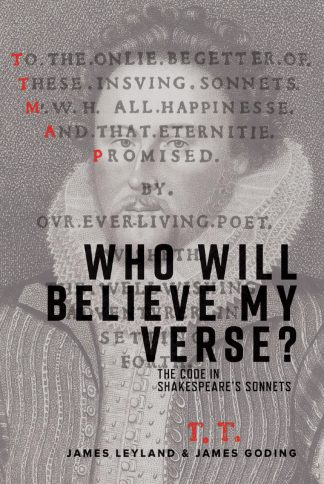 You're viewing: Who will believe my verse? The Code in Shakespeare’s Sonnets $44.00
Add to cart