Welcome and Farewell: The Story of Station Pier

In the mid-nineteenth century, Victoria’s primitive maritime infrastructure was not coping with the volume of passenger and cargo traffic arriving in and departing from the burgeoning gold-fevered colony. However, the opening of Railway Pier at Port Melbourne in 1854 greatly improved the situation.

Railway Pier serviced the steamships, which plied Port Phillip Bay and the Victorian coastal waters beyond, and also offered berths for vessels on the regular runs to other Australian colonies and to overseas destinations. However, as the larger and more powerful steamships of the early twentieth century found berthing increasingly difficult at Railway Pier, the need for a more modern pier became apparent. By 1930, the new Station Pier had replaced its predecessor. Itself extended and upgraded several times including during the past decade, Station pier still offers every contemporary convenience to shipping services using its busy facilities, just as did its predecessor Railway Pier, 150 years ago.

The Victorian Government commissioned Welcome & Farewell to celebrate the 150 years since the opening of the Railway Pier. In doing so, it was mindful that the story of the site is not limited to its contribution to national and state economies, or to its physical development. The Government wanted a history that would also speak to ordinary Victorians, and other Australians, of their own experiences of this significant place.

For indeed the Station Pier site has played its part in almost every milestone or phase in our history: at moments of celebration and commemoration, during economic booms and depressions, during times of war and peace. It has also won a place in the hearts of ordinary individuals affected by the welcomes and farewells they have experienced there: those for visiting royalty and celebrities, for servicemen and medical personnel off to war or returning home, for migrants from distant countries and refugees from war zones, for friends and family travelling for personal, professional or cultural reasons.

Welcome & Farewell thoughtfully examines Station Pier’s significance and offers a splendid visual panorama of the experiences lived out there between 1854 and 2004.

Be the first to review “Welcome and Farewell: The Story of Station Pier” Cancel reply 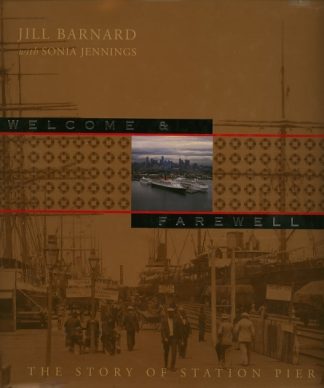 You're viewing: Welcome and Farewell: The Story of Station Pier $49.95
Add to cart