Vic Bar: A History of the Victorian Bar

In 1841 in Port Phillip’s new Supreme Court a young Redmond Barry argued that the evidence against two Tasmanian Aboriginals accused of murder was quite insufficient for conviction—to no avail. In January 1842 the first execution took place in front of 3000 spectators. Four decades later, the eminent Redmond was to sentence Ned Kelly to death. In 1855 the 13 Eureka rebels were tried for High Treason—a hanging offence. The jury wasn’t having it.

These were just three of many dramatic incidents in our early history, and countless others have since played out in our courts, under a system of justice in which barristers are the contestants. The author describes the Victorian Bar as a collective of individuals. The reader will find many great figures of the Law and of Politics—and a vanguard of activists who have pressed for human rights and social progress.

Peter Yule writes fine biographies and histories, and his recent The Long Shadow: Australia’s Vietnam Veterans Since the War has been widely acclaimed.

Be the first to review “Vic Bar: A History of the Victorian Bar” Cancel reply 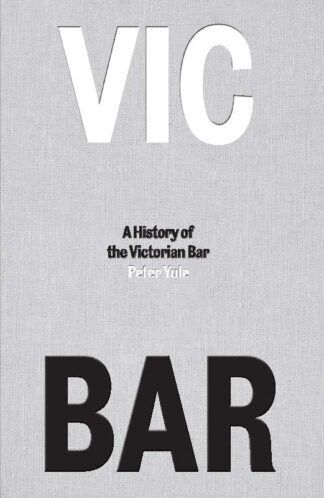 You're viewing: Vic Bar: A History of the Victorian Bar $69.95
Add to cart