A significant event in 20th-century Australian history: the transition from the liberal foreign policy approach of the Chifley Labor government to the more strident anti-communism of the conservative Menzies government

The transition from the liberal foreign policy approach of the Chifley Labor government to the more strident anti-communism of the conservative Menzies government after 1949 is a significant event in 20th-century Australian history. During the period 1950–1966 the Menzies government faced a range of challenges such as relations with the USA, responses to the USSR and China and the question of Indonesia and decolonisation in post-war South East Asia. In response the Menzies Government developed new foreign policies, encouraged a particular style of diplomacy and helped to establish a new Cold War attitude towards Australian international affairs.

This period saw growing interest from politicians, diplomats and academics for developing new types of foreign policy analysis about communism in South East Asia, or the Cold War in general. While some networks between politics, bureaucracy and academia linked to foreign policy analysis had existed in the 1930s and 1940s, from the 1950s new and more powerful relationships were being established. Various academics, many from the Australian Institute of International Affairs (AIIA) and the Australian National University (ANU) forged close and ongoing contacts with the DEA. The relationships between small groups of key individuals and institutions ultimately wielded significant influence on issues such as the Cold War and Australian foreign policy debates. 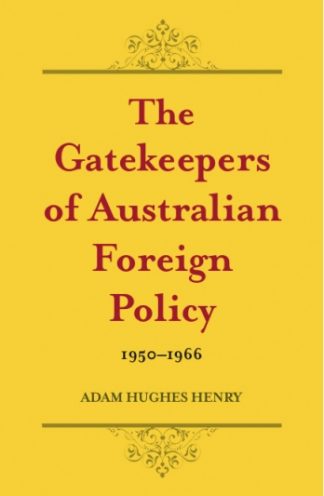