View cart “Black Writers, White Editors: Episodes of collaboration and compromise in Australian publishing history” has been added to your cart.

What was the state of Anglo-Australian relations in the aftermath of the Second World War? How did Australia and the United Kingdom respond to the search for a post-war international settlement, to the onset of the Cold War and to the beginning of the decolonisation of the European empires in Asia? When did Australia develop an independent international status and an independent foreign policy? How did the United Kingdom react to its changing relationship with Australia? When did Australia decolonise?

The Empire Fractures provides original and compelling answers to these questions through a detailed study of the relationship between the Chifley and Attlee labour governments in the years from 1945 to 1949. Christopher Waters lucidly tells the story of the deep conflict that marked Anglo-Australian relations in the international sphere during the immediate post-war years. Founded on unrivalled researched in both Australia and the United Kingdom, his book also offers a new understanding of the ideas and policies of the key figures in this story, Dr Herbert Vere Evatt and Ernest Bevin, and makes a major contribution to Australian history, imperial history and the history of the Cold War.

Be the first to review “The Empire Fractures” Cancel reply 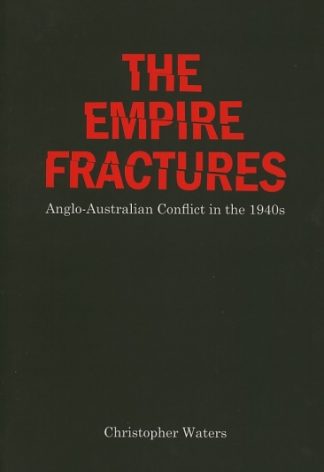 You're viewing: The Empire Fractures $44.00
Add to cart