Surviving Captivity: The campaign and POW diary of Bob Christie

The survival of Australian prisoners of war by the Japanese has been attributed, variously, to Providence, mateship and just plain luck.

POW diaries – those remarkable expressions of the will to live – reveal another side to survival.

Surviving Captivity reveals an intensely personal and private battle, waged with the weapons of faith, hope and love of family.

Bob Christie enlisted in the AIF in 1940, fought with the 2/29th Battalion in Malaya and Singapore, and was a POW in Changi and Thailand 1942–1945. After the war he dedicated himself to the welfare of veterans and their families. As Hon. Secretary of the 2/29th Battalion AIF Association for more than 60 years, Bob is the acknowledged head of the Battalion family.

John Lack's father was a member of the 2/29th Battalion. After 40 years of teaching in Victorian schools and universities, John became a freelance editor, researcher and writer. His books include histories of Footscray and the Footscray Football Club, and of Australian immigration. He also co-authored and co-edited 'No Lost Battalion', an oral history of the 2/29th Battalion AIF. Surviving Captivity is his twelfth book.

Hear the audio lecture recorded at the Shrine of Remembrance launch Here.

Be the first to review “Surviving Captivity: The campaign and POW diary of Bob Christie” Cancel reply 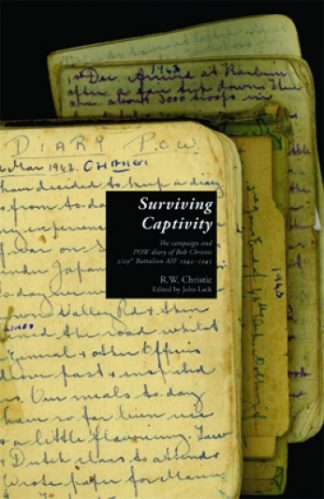 You're viewing: Surviving Captivity: The campaign and POW diary of Bob Christie $39.95
Add to cart