Collections, Characters and Communities: The shaping of libraries in Australia and New Zealand

Collections, Characters and Communities brings to twenty-first-century readers a kaleidoscope of the rich and varied library world of Australia and New Zealand in the 1800s and 1900s. It is a story of public and private endeavours, of co-operation and inter-state rivalry, of dominant, not to say controlling personalities, and of the reach of books into the outback as well as into the working-class suburbs of cities. There is a North American dimension in Carnegie's support for the Dunedin Public Library and in his Corporation's critical and often unflattering view of Australian universities in the 1930s. Even South America makes an appearance through the library set up in the Australian utopian colony at Cosme in Paraguay. Otherwise it is a matter of the dense network of schools of arts, athanaeums and mechanics' or literary intstitutes across the two countries, not to mention notable urban concentrations of commercial lending collections before public libraries came into their own in the second half of the twentieth century. Librarians' training and collaboration, under the watchful eyes of such outsize figures as Redmond Barry and John Metcalfe, are at one end of a spectrum that also encompasses the needs of people in the Queensland bush. Bringing printed matter to all Australians and New Zealanders was manifestly never a straightforward process.

Be the first to review “Collections, Characters and Communities: The shaping of libraries in Australia and New Zealand” Cancel reply 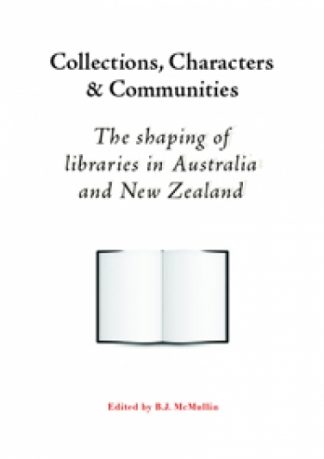 You're viewing: Collections, Characters and Communities: The shaping of libraries in Australia and New Zealand $29.95
Add to cart