Owen Suffolk’s — Days of Crime and Years of Suffering

Owen Suffolk was born in 1829 in Finchley, London, into comfortable circumstances. In 1844 he was charged with stealing and sentenced to a year’s detention. In 1846 he was convicted at the Central Criminal Court, London, for forgery and intent to defraud and was sentenced to seven years’ transportation. In the following year he was transported to the Port Phillip District of New South Wales as an exile. He offended again in Australia and, following various reversals of fortune, spent more than sixteen years in colonial gaols, enduring four bouts of imprisonment before his release and return to Britain in 1866.

Suffolk was no common criminal but a poet, storyteller and orator. In 1867 his autobiography days of Crime and Years of Suffering was published in the Australasian, a leading weekly newspaper of the period. It has never been reprinted in full in book form, until now. 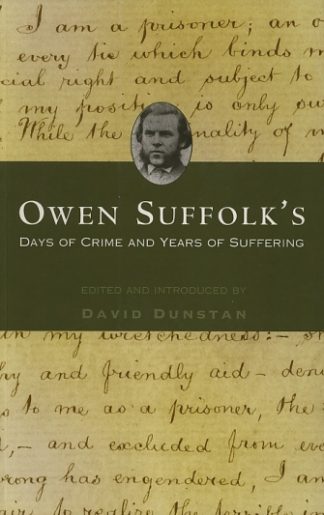 You're viewing: Owen Suffolk’s — Days of Crime and Years of Suffering $44.00
Add to cart