Leadership and the Liberal Revival — Bolte, Askin and the Post-war Ascendancy

The collapse of the conservative forces in Australian politics during World War II sparked a crisis in Australian liberalism. The extensive use of wartime regulation to control the economy plus the development of far-reaching plans for post-war reconstruction was the driving force behind the creation of the modern Liberal Party in 1944–45. But the architects of this liberal revival recognised that they needed more than just a party structure; they needed a new type of leader. It was left to two knockabout leaders with more than a touch of the Australian larrikin, Henry Bolte in Victoria and Bob Askin in New South Wales, to revive the liberal fortunes in the two largest states.

Be the first to review “Leadership and the Liberal Revival — Bolte, Askin and the Post-war Ascendancy” Cancel reply 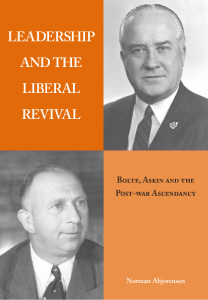 You're viewing: Leadership and the Liberal Revival — Bolte, Askin and the Post-war Ascendancy $39.95
Add to cart