John Farrell was an integral figure in the literary and political ferment of the 1880s and 1890s in Australia.

John Farrell was an integral figure in the literary and political ferment of the 1880s and 1890s in Australia. A popular poet and polemicist, he was a regular contributor to the Bulletin and was briefly editor of the Sydney Daily Telegraph. He was also an important radical activist, writing and campaigning in the cause of the land nationalization and single tax movement associated with the American social theorist Henry George. ‘I as a lad worshipped him,’ Henry Lawson wrote.

Paul Stenhouse brings to life this important and neglected writer, reassessing his comic and satiric poetry, exploring his time as editor and publisher of a succession of regional newspapers, and situating him in the company of the many friends and associates amongst his contemporaries. Francis Adams, Barbara Baynton, Edwin Brady, Fred Broomfield, Victor Daley,  Mary Gilmore, Philip Holdsworth, Sydney Jephcott, A. B. Paterson, and Brunton Stephens were amongst the writers he was associated with. While the Single Taxers and early Australian Labor Party figures who owed their start in politics to Farrell, and upon whom his influence rested long after his death, include Joseph Cook, Frank Cotton, William Hughes, William Holman, George S. Beeby, George Black, John Haynes, E. W. O’Sullivan, William Bede Dalley, Alexander Sutherland, and James Ryan.

J. F. Archibald, the founder of the Bulletin, recalled, ‘Few men on the press of Australia at any period in our literary history have been so powerful for good as John Farrell.’ 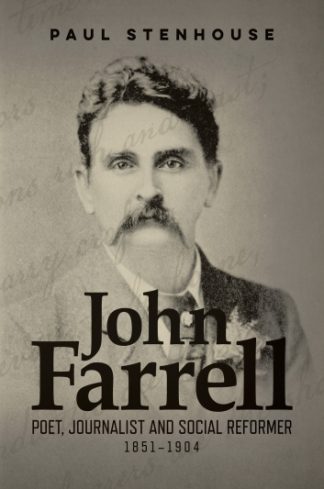