In Due Season: Australian Literary Studies, a Personal Memoir

For his services to education, especially in the field of Australian literature, in 1990 Harry Heseltine was appointed an Officer in the Order of Australia. He is also an Honorary Fellow of the Australian Academy of the Humanities. This account of a long and distinguished career gives a special insight into the varying fortunes of the discipline he helped to establish, along with recollections of some of the major personalities involved. In Due Season also reprints some of his most important writings: milestones in a career which helped to shape our understanding of Australia’s literary culture. His writings were right for their time, and are still current. All are truly words spoken in due season.

Be the first to review “In Due Season: Australian Literary Studies, a Personal Memoir” Cancel reply 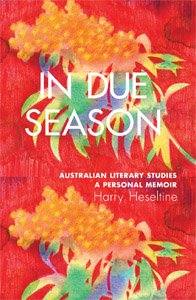 You're viewing: In Due Season: Australian Literary Studies, a Personal Memoir $39.95
Add to cart