By What Authority? Criminal law in colonial New South Wales 1788–1861

‘By What Authority?’ makes a ground-breaking new case for a history of Australian criminal law from the bottom-up.

By What Authority? makes a ground-breaking new case for a history of Australian criminal law from the ‘bottom-up’. It does so by weaving together fascinating episodes of violence, protest, courtroom drama and colonial governance. For most people in the penal colony of New South Wales criminal law was a brutal instrument of political coercion. It was also a part of daily life. In this sense, the law and its procedure were sometimes wielded by unlikely advocates in ways that not only reformed the law but transformed the social and political life of the colony. Eugene Schofield-Georgeson argues that the reform of criminal law in the colony owed as much to the agitation and resistance of working-class radicals, an early labour movement and in some cases Aboriginal people, as it did to the judges, barristers and politicians who officiated over legal change.

Be the first to review “By What Authority? Criminal law in colonial New South Wales 1788–1861” Cancel reply 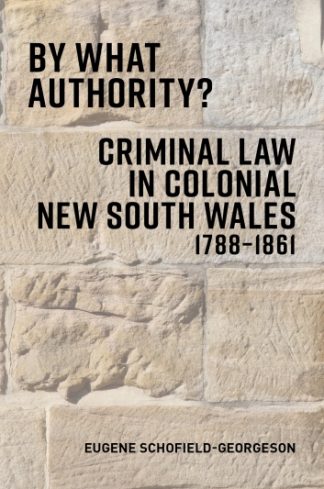