A Manifesto for New South Wales: Edward Smith Hall and the Sydney Monitor 1826–1840

Colonial Newspapers were an important source of information for their readers. They also provide modern readers with valuable insights into thoughts and opinions of the time. Edward Smith Hall edited the Sydney Monitor from 1826 until 1840. He remained at the helm of a newspaper far longer than any of his contemporaries. His articles provide a continuous record of his thoughts on New South Wales over a fourteen year period. They reveal a man setting out his vision for New South Wales, and in the process leaving a unique and fascinating account of life in the colony.

Author Erin Ihde provides a penetrating, lively exploration of Hall’s writings in the Monitor. From convicts to custom, race to religion, protest to precedent, Hall let no facet of Colonial society escape his gaze. A fearless upholder of the rights of the poor, of convicts and of anyone else he considered oppressed, his clashes with authority saw him gaoled by Governor Darling. In a passionate and at times confronting manner, he spelt out how New South Wales needed to evolve from its British antecedents. His work is a testament to his tenacity and, taken as a whole, was a most valuable manifesto for New South Wales.

Be the first to review “A Manifesto for New South Wales: Edward Smith Hall and the Sydney Monitor 1826–1840” Cancel reply 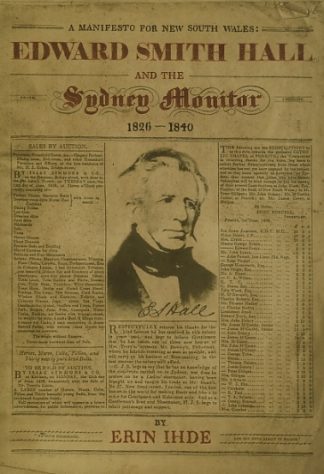