This volume brings together the poetry of Nicholas Lyon Gresson covering fifty-five years of writing.The poems start with the writings of a sixteen year old boy in the 1950s, and they emerge through the decades of life to 2010, where we meet the seventy year old man whose modes of thought are revealing the world of our existence.

Nicholas Lyon Gresson was born in Christchurch, New Zealand, on 19 December 1939, to Terence Arbuthnot Gresson and Eleanor Lyon Gresson ne Denniston. Both parents had strong legal backgrounds, and Nicholass love and respect of the law is profound. Alongside writing and photography has been his immersion in work against crime, for which he was awarded a Royal Honour. Photography too has played a significant part in Gresson's life, and he was the inaugural photographer forArt News Auckland, nowArts News New Zealand. The death of his eight year old son Emerson in 1982 led to a poignant series of poems in his sons memory. Today his daughter and two grandsons live in Christchurch.

Be the first to review “A Life in Poetry: Nicholas Lyon Gresson” Cancel reply 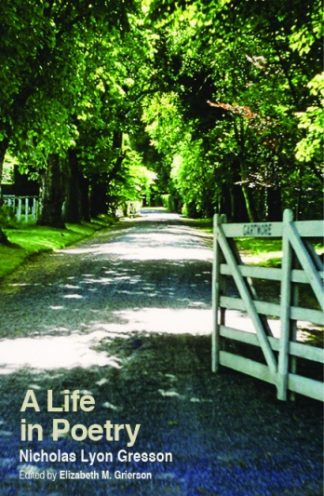 You're viewing: A Life in Poetry: Nicholas Lyon Gresson $24.95
Add to cart