A Disappearing World offers a fascinating glimpse of class and gender relations in two working-class communities in the second half of the 20th century. Drawing on the life histories of fourteen individuals, Ian Watson explores themes of working-class culture, gender and work. He also examines what memory means for personal and social identity.

Direct quotations from interviews provide a rich and powerful testimony to the dignity of working-class life in Australia. At the same time, they illustrate the physical hardship of manual labour, the violence of patriarchal family life, and the lost potential that accompanied class and gender oppression. While many of these elements endure in contemporary Australia, others belong to a disappearing world.

‘He used to sit down at the laundry step at the back and take his boots off, which would be filled with little bits of coal … He used to wear a grey pit flannel … And he didn’t talk much about it except that, you could see he hated it, you could see that he really and truly hated it. He used to tell us stories about the horses, they had the horses down in the mine, pulling the skips out … And I suppose he wasn’t even well, even in those days, the dust must have been starting to settle in his lungs and cause ill-health. But he used to go and have a big hot bath, and then he would have a meal, and then he would lie down on the couch that we had in the living room and he would just go to sleep and he’d wake up sometime in the evening and he’d read and he’d listen to the radio, or whatever. And then he’d go off to bed early, because he was really, really exhausted, physically exhausted.’ (A coalminer’s daughter)

Be the first to review “A Disappearing World: Studies in Class, Gender & Memory” Cancel reply 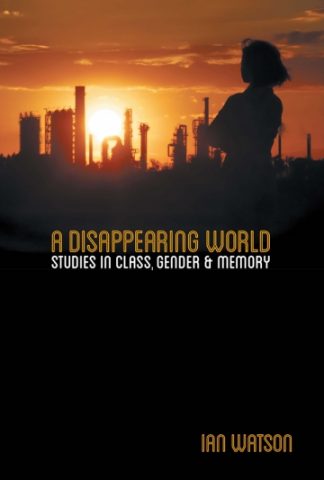 You're viewing: A Disappearing World: Studies in Class, Gender & Memory $39.95
Add to cart