In 1975, a tiny, grey-haired woman took the microphone at a protest rally following Prime Minister Whitlam's dismissal, and blasted the audience with an impassioned speech about the importance of the democratic process.

Dorothy Auchterlonie Green was a teacher, literary critic and poet. Together with her husband H. M. Green, she is best known for her unstinting work to promote Australian literature. In her later years, she established herself as a defender of the power of the word, using her writing and speeches to expose those structures in our society which misuse language for exploitation and greed.

How did this small conservative academic become a warrior for peace? Willa McDonald traces Dorothy Green's path to political activism, from her childhood and early working years as a wartime radio journalist in Brisbane, through to the 1980s and her role in the founding of the Australian Association for Armed Neutrality, the Nuclear Disarmament Party and the lobby group, Writers Against Nuclear Arms. 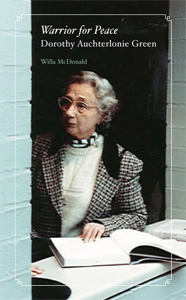