View cart “The diary of Philip Thomas Smith on board the Royal Admiral en route for Van Diemen’s Land” has been added to your cart.

One of Tasmanias earliest settlers, London lawyer Philip Smith, hated almost every minute of the 4 month journey to Australia. However, during the trip, he kept detailed day-by-day notes. He then rewrote them as a witty, acerbic and entertaining account of his adventures

Philip Smith (1800–1880), one of Tasmania’s earliest settlers and later one of its best known, doesn’t tell us why in 1831 he left his career as a London lawyer, except (ambiguously) that he had been ‘a wicked wight’. Racked with sea-sickness and contemptuous of the miserly and hot-tempered Captain with his incomprehensible Scots accent, he hated almost every minute of the 4½ month journey.

Partly to keep himself sane, Smith kept detailed day-by-day notes and then rewrote them as a witty, acerbic and entertaining account of his adventures. He chronicles everything from obsessing about the wind and their progress (or lack of it) to diversions to pass the time: a ceremony to mark crossing the Equator; catching and eating shark; a sudden enthusiasm for chess amongst both those accommodated in the cabin and those in the steerage. He rejoices in dawns and sunsets, is exhilarated by lightning and wild weather, vividly describes a terrifying hurricane with the ‘sea running mountains high and white as a field of snow’ and occasionally helps the sailors pump out the ship which has sprung a small leak.

Smith clearly thought himself much superior to his fellow travellers and grumbles that most of what he recorded about them was ‘petty squabbling & disputes & pitiful sayings’ but it is his close attention to the emotional complexity of everyone from the Captain to individual sailors, cabin passengers to steerage servants, that, today, makes his diary so rich and interesting. 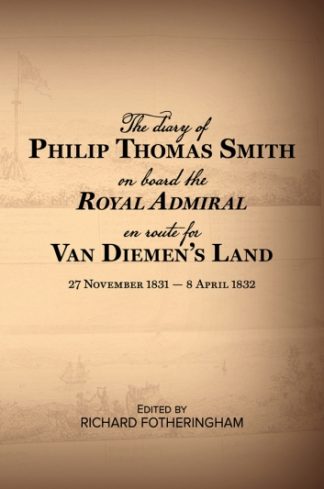 You're viewing: The diary of Philip Thomas Smith on board the Royal Admiral en route for Van Diemen’s Land $39.95
Add to cart