The Confident Years: Australia in the 1920s

The Confident Years records the buoyant era between the hard-won victory of World War I and the deep setbacks of the 1930s Depression and World War II. Now a hundred years ago, it was the time when the horse and buggy gave way to the motor car, aeroplane, wireless and cinema. Many colourful personalities were in their heyday—among them, Billy Hughes, Jack Lang, Archbishop Mannix, Keith Murdoch, John Wren, Gladys Moncrieff and ‘Squizzy’ Taylor. Charles KIngsford Smith (‘Smithy’) was the first pilot to fly across the Pacific. Don Bradman was beginning his cricket career. Roy (‘Up there’) Cazaly was the star Australian footballer and Dally Messenger, the first Rugby League immortal. The colt Phar Lap was at the start of his incomparable years on the racecourse. The setting may at first seem like that of another country—at once boisterously optimistic, patriotic, staid and smug—and yet it is still recognisably very Australian. 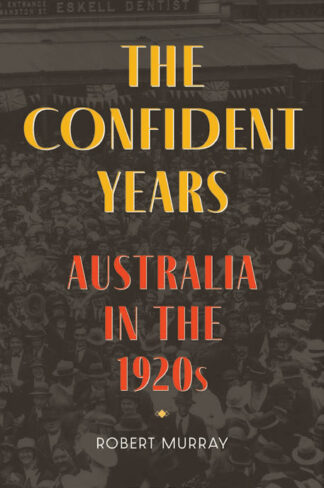