Raffaello! Raffaello!: Raffaello Carboni at Eureka, Before and Beyond It

This new version of a compelling biography shows Carboni as a talented, complex, bumptious but, ultimately, disappointed man who gave Australia more than he gleaned.

Raffaello Carboni shaped our view of the Eureka Stockade but, before this biography, little was known about the man. Of the 13 tried for high treason after the uprising, he was the only one who had faced a similar charge in his home country where he had already lived through an experience similar to that of the Stockade.

For Carboni the most significant moment at Eureka was not the Stockade onslaught but the miners’ pledge of solidarity, which showed that those who had come to get gold and get out had become opponents of injustice.

On his return to Italy, Carboni rejoined the Garibaldian battle for national unity but also surprisingly suggested a ballet of nude aboriginal females for La Scala Opera house in Milan. He remained unpredictable but his flamboyance should not obscure the fact that, because of his political background, he made a crucial contribution to a key episode in Australian history.

This new version of a compelling biography shows Carboni as a talented, complex, bumptious but, ultimately, disappointed man who gave Australia more than he gleaned.

What can be said of red-haired, passionate, romantic Raffaello Carboni who fought for freedom in both Rome and Ballarat, and was arrested for high treason in both places? Desmond O’Grady has discovered much and recounts it all with compassion, insight, deep knowledge, fine writing and flair. Every Australian should know Carboni: his spirit is entwined with our own.

Be the first to review “Raffaello! Raffaello!: Raffaello Carboni at Eureka, Before and Beyond It” Cancel reply 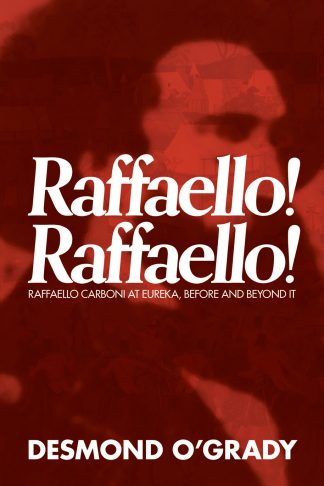 You're viewing: Raffaello! Raffaello!: Raffaello Carboni at Eureka, Before and Beyond It $34.95
Add to cart