Lord Sydney: The Life and Times of Tommy Townshend

The several Goals and Places for the Confinement of Felons in this Kingdom being in so crouded a State … I … signify to your Lordships His Majesty’s Pleasure, that you do forthwith take such Measures as may be necessary for providing a proper number of vessels for the conveyance of 750 Convicts to Botany Bay, together with such Provisions, necessaries and Implements for agriculture as may be requisite for their use after their arrival …

When the British Cabinet accepted his recommendation that convicts be sent to Botany Bay, Lord Sydney—Thomas Townshend—instructed the Treasury ‘forthwith’ to provide for the First Fleet.

A John Bull figure, full of bumptious ambition and self-confidence, ‘Tommy’ Townshend spent most of his working life in parliamentary opposition. He sympathised with the American colonists while holding true to British interests, and was made a peer in 1783 for his key role in settling the peace between Americans and Britons. Among other things, he saw to it that Canada’s boundary with the United States was drawn through the Great Lakes, not further north, as the Americans had demanded.

Townshend chose the name Sydney for his barony in memory of his distant uncle Algernon Sidney, who had been beheaded in 1683 for writing ‘the people of England…may change or take away kings’. As a cabinet minister, though, he was measured and capable, displaying ‘the rare faculty of perceiving intuitively, the latent powers in the men with whom he came in contact’. His choices of Henry Strachey to negotiate the peace with America and Arthur Phillip to lead Australia’s first European settlement were inspired.

To find out more about Andrew Tink visit his website here.

Be the first to review “Lord Sydney: The Life and Times of Tommy Townshend” Cancel reply 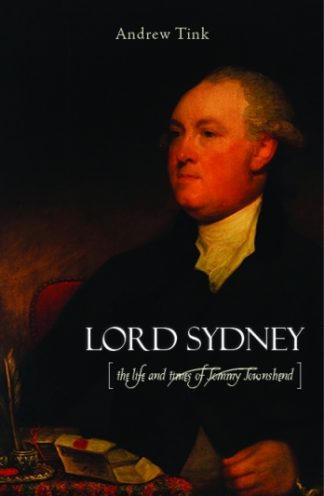 You're viewing: Lord Sydney: The Life and Times of Tommy Townshend $44.00
Add to cart