“Little Demon” finds investigator Plant back in the iconic paradise of Byron Bay, hired by ageing rock n roll journalist Rock Richmond whose computer with his history of the alternative communes has been stolen.

Little Demon finds investigator Plant back in the iconic paradise of Byron Bay, hired by ageing rock ‘n’ roll journalist Rock Richmond whose computer with his history of the alternative communes has been stolen. Plant’s rural retreat is invaded by conspiracy theorist Fullalove, who figures Richmond had been writing about rumoured Cold War arms caches and secret militias. Plant’s inquiries involve Rock’s wife, a barrister specialising in drug cases, his girlfriend the mysterious Madimi, and caravan park owner and rifle club president Jake, a former army officer who used to run a commune.

‘With a detective called Plant and a journey from Sydney to the dope fields of Byron Bay, the private eye novel has come a long way from Raymond Chandler … the detective novel’s move into an era of magic mushrooms and free love.’ – Sydney Morning Herald.

‘Plant investigates, not the petty individual crimes like kidnapping, murder or extortion, but the big picture – the intellectual and political follies of the age. True to the genre, Plant’s cases start small and grow but, unlike the books in which the bodies pile up, with Wilding the unstable underpinning of modern industrialised society is laid bare. And made hilariously funny.’ – Peter Corris.

Be the first to review “Little Demon” Cancel reply 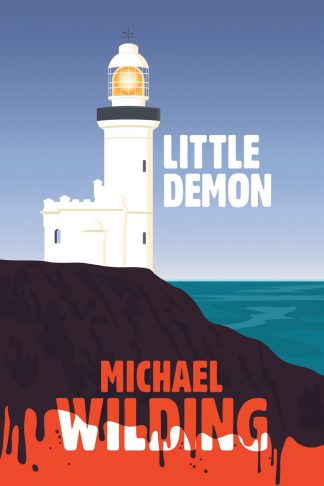