From Small Beginnings: The Victorian School of Languages

More than a mere chronological recount of milestones and achievements of the VSL over its 80-year history, but a nuanced, analytical, and critical account of what is arguably one of Victorias greatest educational assets

The Victorian School of Languages: 80 years, 40 languages, 40 centres, 800 teachers, 15,000 students—traversing both formal and informal spaces for delivering languages within the Victorian education system. The task of documenting the origins and growth of such a rich and complex entity is formidable, yet Bryant and Mascitelli rise to the challenge brilliantly. The result is more than a mere chronological recount of milestones and achievements of the VSL over its 80-year history, but a nuanced, analytical, and critical account of what is arguably one of Victoria’s greatest educational assets.

Bryant and Mascitelli give due consideration to the macro-societal changes that have marked the growth of the VSL since its inception in 1935 including World War II and a major economic recession—but they weave this seamlessly with micro-personal accounts of what was happening ‘on the ground’: the lived everyday experiences of school life captured in the oral histories of teachers, students, administration, policy-makers, advocates, and—at times—voices of dissent. This book achieves this in a way that doesn’t shy away from the contradictions that inevitably arise between bureaucratic concerns at the policy level, with the everyday needs of staff and students in the school. Rather, the authors take the reader on a journey that helps make sense of how the complex texture comprising the historical foundations of the VSL has come to make the school what it is today. This book is not only a pleasure to read as a milestone celebrating 80 years of the VSL, but a valuable resource from which to learn important insights for languages provision, policy, and planning.

Be the first to review “From Small Beginnings: The Victorian School of Languages” Cancel reply 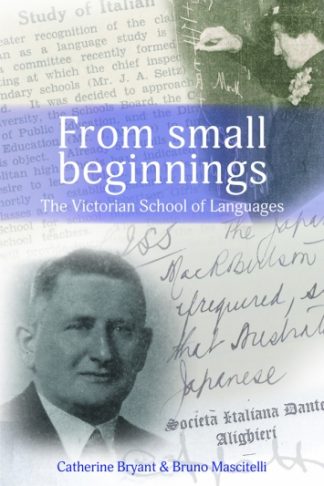 You're viewing: From Small Beginnings: The Victorian School of Languages $44.00
Add to cart