John Williams examination of the German perspective of Gallipoli brings into relief the place of the campaign in the First World War as a whole. Through German eyes, what finally tipped the balance of the campaign was the brilliance and audacity of a lone-wolf U-boat commander.

When in August 1915 Grand Admiral Tirpitz warned that if the Dardanelles fell Germany would lose the war he was expressing the view, not only of other German military strategists, but also that of Winston Churchill. Churchill, of course, has been widely blamed by his own side for a campaign doomed in its very conception. The idea that the Allies were defeated at Gallipoli not because of Churchill’s faulty conceptualization but because of inferior Anglo–French leadership runs like a leitmotiv through German accounts, which even reveal their anxiety that the Dardanelles would likely be breached on the night of the first attempt. They reveal, too, that in German eyes what finally tipped the balance of the campaign was the brilliance and audacity of a lone-wolf U-boat commander.

Because three of the nations involved – Australia, New Zealand and Turkey – have responded to the defence of the Dardanelles as a ‘birth’ or ‘rebirth’ of their nation, the fact that it was German-led has been neglected. John Williams’ examination of the German perspective brings into relief the place of the Gallipoli campaign in the First World War as a whole.

A consideration of the role of the Germans is important for another reason. The complete evacuation of Gallipoli’s Greek civilians – resulting in the death of their overwhelming majority, either killed by the local population or left to starve – was ordered by a German general. At the time, the Turkish government’s own deportations of Greeks had been suspended, which is probably why this instance of what is now called ‘ethnic cleansing’ or ‘genocide’ has remained virtually unknown. Greek Australians who celebrate Anzac Day have been mostly unaware that this is also the anniversary date of the beginnings of an extermination of a two-thousand-year-old branch of their own people.

Be the first to review “Deutschland über Allah! Germany, Gallipoli and The Great War” Cancel reply 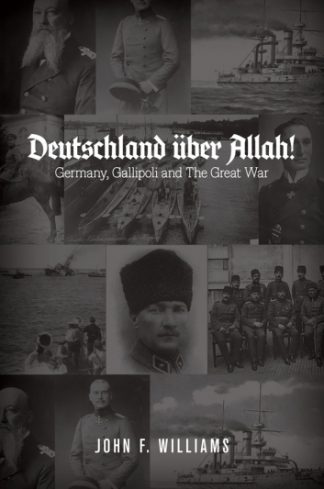