During the Second World War the cattle industry in northern Australia was under stress. It was a boom time for business, in particular for the large international firms like Vesteys, selling beef to the allied armed forces. At the same time they lost stockmen, especially Aboriginal labourers to the defence forces, where Aborigines were paid proper wages.

In this crisis of labour shortage Vesteys, resistant to pressure by government to improve working conditions, took an unprecedented measure. They engaged two young anthropologists – Ronald and Catherine Berndt – as liaison and welfare officers to tackle the labour problem. The Berndts were to assist in increasing the Aboriginal workforce by investigating, so they believed, on ways to improve the treatment and working conditions of Aboriginal pastoral workers. Vesteys, however, as it gradually transpired, had different priorities.

Abrogating Responsibility analyses the complex political and personal relations between representatives of the cattle industry, northern territory and commonwealth governments, anthropologists and Aboriginal people. With the exception of A.S. Bingle, General manager of the Australian Investment Agency (the Australian subsidiary of the British based Vestery Brothers) each of the main protagonists – A.P. Elkin, professor of anthropology at the University of Sydney, E.W.P. Chinnery, director of the Northern Territory Native Affairs Branch, and the Berndts – were possessed of the best intentions and actively sought ways to ameliorate and advance the position of Aboriginal people. As the the Berndts’ survey drew to an end the director of the Natives Affairs Branch in the Northern Territory wondered:

‘Is it a practical proposition to employ two anthropologists to observe conditions on your stations with a view to suggest improvements, and then to treat any comments, impressions and suggestions they make as negligible?’

Abrogating Responsibility seeks answers to the question: how was it possible, with so much knowledge about the horrendous conditions Aboriginal people labored and lived in, and so many well-intentioned agencies and individuals, that nothing changed? Ensuing the laying of blame the book’s careful and detailed analysis opens up new insights into a system that placed Aborigines at the end of the line in a series of relationships on a local, state, and national level

Be the first to review “Abrogating Responsibility” Cancel reply 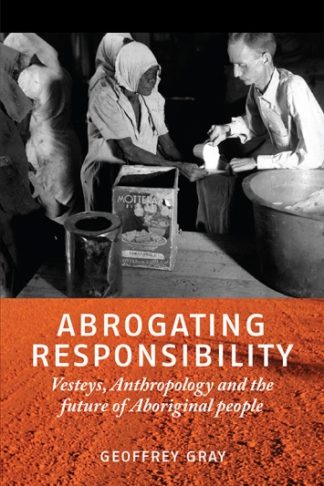