A Different Kind of Subject describes the approach taken by British and colonial governments towards Aboriginal–European relations in Western Australia, focusing on British colonial law, during the period where magistrates and judges were recruited from among the settlers, prior to the establishment of formal Supreme Court in 1861.

It analyses how various legalistic devices were employed to deny Aboriginal people their rights particularly Noongar people on whose land the colonial invasion first occurred, and examines how colonial law was used to regulate Aboriginal–European relations. During the early 1830s when the future of the colony was in doubt, proposals for agreements were made that sought a solution to conflict over land and resources. Noongar asserted their own worldview and laws on the newcomers but with limited success as they witnessed restrictions on their activities and access to their country. Instead Aboriginal people were subject to a new kind of status with neither rights as full British subjects nor as Indigenous inhabitants. The increase in Aboriginal labour in the new colonial society would mean that Aboriginal people would be regarded as a different kind of subject. The legacy of that failure to negotiate status and rights has lasted until the present day, but the recent opportunity for the WA Government and Noongar people to negotiate an agreement is a timely reminder of what may be possible.

Be the first to review “A Different Kind of Subject: Colonial Law in Aboriginal European Relations in 19th Century Western Australia, 1829–61” Cancel reply 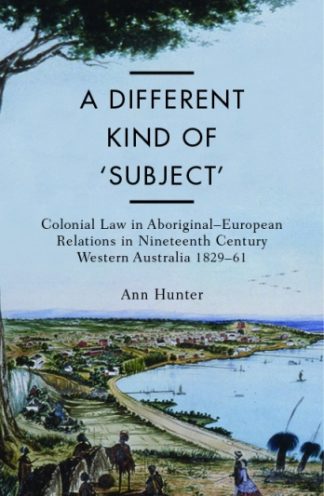