From An Evolutionary Point of View? A Series of Occasional Drawings

How did this book of unusual drawings, arranged in a hypothetically evolutionary cycle, come about?

With a Berlin Diploma of Graphic Art, a successful audition for the Berlin Staatsoper and extensive adventures in the South Seas Islands, Klaus Zimmer arrived in Australia in the 1950s. After working as the Snowy Mountains Authority’s graphic designer, and more Pacific travels, he returned to art school to study painting. He also joined Melbourne’s Theosophical Society and furthered his interests in spiritualism as fostered by Wassily Kandinsky and Madame Blavatsky. But life is serendipitous and, by chance, he became a pioneer of Australia’s studio glass movement with many major stained-glass commissions here and overseas.

Nearing the end of his life, Zimmer wished to return to painting and began with drawings that are significantly influenced by his experience of the animistic arts of the South Seas and those of other cultures which combine human, animal and every other element in the concept of a universe that is vitally alive in all its aspects, both animate and, supposedly, inanimate.

Extensively illustrated with 1950s photographs of the Islands, examples of Zimmer’s glass and an array of drawings, this book offers fascinating glimpses into the mind of a spiritually reflective artist — and not always without humour. 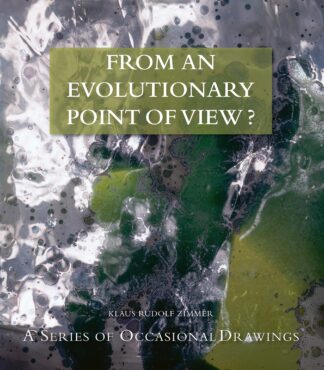 You're viewing: From An Evolutionary Point of View? A Series of Occasional Drawings $65.00
Add to cart