For The Fallen: The 1921-1922 Melbourne Public Library Mural Competition within the setting of Decorative Painting in Australian Art (Paperback)

In December 1921 the Melbourne Public Library launched an historic mural competition seeking to obtain a fifty-foot-long wall decoration to honour those who gave their lives in the Great War. Lindsay Bernard Hall – the National Gallery of Victoria’s formidable Director and strict disciplinarian Painting Master of the Gallery’s prestigious Art School – conceived the idea, overseeing it along every step of its unpredictable course.

The competition collapsed controversially in August 1922 with no outright winner declared. New Zealand-born artist Harold Septimus Power was approached to proceed with the design he had entered, which was only accepted by the narrowest of margins by the institution’s Board of Trustees on the advice of three judges.

This major, ground-breaking study brings to life the vast cast of the art world involved in the controversial competition. Myriads of relevant connections and inter-relationships spanning decades are navigated to feature the significant place that decorative painting occupied within Australian art, when it successfully challenged the dominance of staid academic realism, being an alternative, creative, way for the contemporary artist to manage pictorial space. 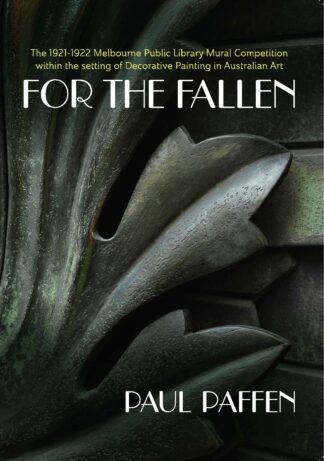 You're viewing: For The Fallen: The 1921-1922 Melbourne Public Library Mural Competition within the setting of Decorative Painting in Australian Art (Paperback) $95.00
Add to cart