The Hawke government’s landmark telecommunications reforms in 1991 opened the door to competition. This was the culmination of a process that began almost a quarter-century before, when Gough Whitlam promised to dismantle the sector’s ‘archaic’ structures.

In the intervening years, governments one after the other faced a succession of political and policy conundrums, as technological change disrupted the status quo and sectional interests battled for and against change. When a competitive new sector ultimately emerged, it bore the scars of hard compromise, the consequences of which we are still grappling with today.

John Doyle held strategy and regulatory roles at Optus from the late 1990s to the early 2010s and was also a board director of the telecommunications sector’s primary industry body, Communications Alliance. He subsequently completed a PhD on the politics of telecommunications reform at La Trobe University, for which he received the Rhys Isaac Prize for best thesis in the humanities and social sciences, and where he is now an adjunct research fellow.

‘The definitive history of telecommunications reform in Australia … provides a unique window into the tensions between good policy and hard politics across the governments of Whitlam, Fraser and Hawke. Essential reading.’ George Megalogenis

‘A fascinating example of policy history that tells an unfamiliar story about Australia’s past, explains peculiarities of our landscape in the NBN era, and contains clues about the nation’s telecommunications future.’ Frank Bongiorno

‘A fascinating study in how, and how not, to make public policy. John Doyle gives us a meticulous analysis of the politics, personalities and industry pressures at work during the most critical years in the development of the modern Australian telecommunications system.’ Gareth Evans

‘John Doyle has written the definitive account of Australian telecommunications policy. He brings to life the key figures, the passions and the deep complexities that played into pivotal decisions … offers invaluable insights into what developing and implementing policy reform is like in the real world, and how this has changed over time.’ Kim Beazley

‘The most comprehensive and balanced account written on this crucial policy matter … Doyle shows how policy reforms central to Australia’s economy can be progressed while also taking account of those disadvantaged by such change.’ Graham Evans

‘Rigorous, insightful and balanced … provides a penetrating analysis of the multi-faceted politics of a leading driver of the tech revolution.’ Richard Alston

‘A fascinating and carefully researched account of a period in Australia’s telecommunications history that to date has not received the focus it deserves.’ Paul Fletcher 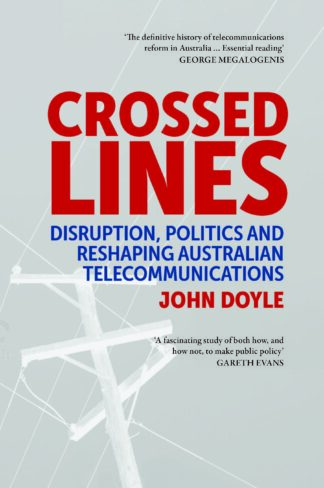